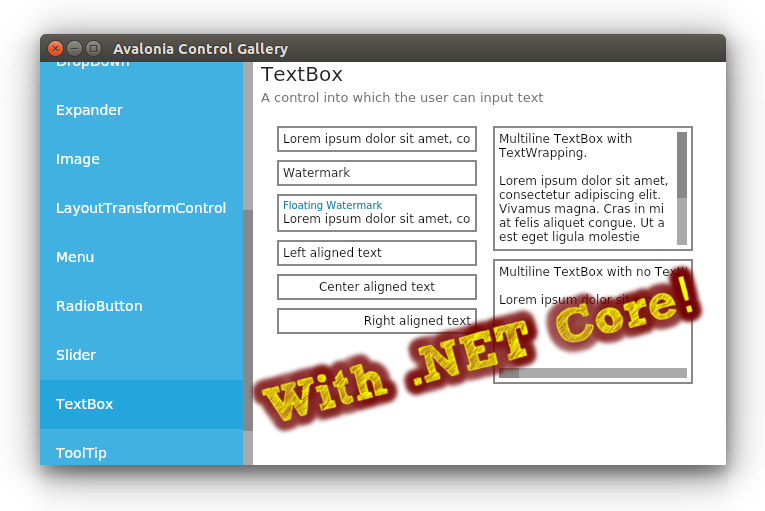 We’re pleased to announce that alpha 5 of Avalonia is now available.

Avalonia is a cross platform .NET UI framework inspired by WPF, with XAML, data binding, lookless controls and much more. Avalonia is the only way to bring XAML-based applications to Windows, Mac and Linux. We also have experimental mobile support!

You can get started by using the Visual Studio plugin which contains templates for creating Avalonia applications and a (basic) designer, and you can browse our NuGet packages. Please note that due to the clusterf#$k that are MS accounts we’ve had to re-upload the extension with a new identity (yet again), so if you have the old version installed you will have to manually uninstall and reinstall the new version.

Here are the new features in Alpha 5:

Support for .NET core has landed! There are now two sets of desktop application templates in our extension, .NET Framework and .NET Core (we hope the merge these in the future) and we’ve started working on templates for dotnet which you can find here. Many of our libraries now target .NET standard, and more will do so in future.

We are now using P/Invoke based GTK3 backend instead of GTK#. Two main issues with GTK# are incompatibility with .NET Core and the need of additional native libraries that have to be built for each Linux distro. As a bonus point we now have a proper support for smooth scrolling on linix/osx.

On OSX it’s now needed to install gtk+3 package from brew. We are planning to create a native OSX backend, since with .NET Core 2.0 it’s now possible to run MonoMac-based applications on .NET Core

We no longer pretend that desktop-like Window is a thing on mobile platforms (previously we had a singleton WindowImpl that mostly consisted of stubs). Instead we now provide an AvaloniaView class that derives from a native view and has Content property which can hold Avalonia controls. You can use this view in any way you want. We also provide AvaloniaActivity for Android and AvaloniaWindow (UIWindow with predefined associated RootViewController) for iOS for convenience purposes, both of which also have Content property.

We now have initial support for running Avalonia directly over a Linux framebuffer.

@jkoritzinsky implemented an extensibility system for automatically initializing 3rd party libraries and for automatically loading the best windowing and rendering subsystems available for the current OS platform. This will allow for control creators to automatically register services and themes required by their controls, as well as allowing dynamic addition of new renderers and windowing systems.

Take a look at the pull request for more details.

Previously, when then binding system encountered an IObservable<> or a Task it automatically tried to subscribe to the observable or task and use the produced value as its value. However this caused problems when a user wanted to actually bind to a property on a class that implements IObservable.

To allow both scenarios, we added a ‘^’ stream binding operator which informs the binding system that the observable/task’s result should be subscribed to. This can be used as follows:

The stream binding operator is pluggable which should allow for some interesting possibilities!

We’re always looking for contributors - if you think you can help, please let us know in our gitter room!