We’re pleased to announce that alpha 4 of Avalonia is now available.

Avalonia is a cross platform .NET UI framework inspired by WPF, with XAML, data binding, lookless controls and much more. Avalonia is the only way to bring XAML-based applications to Windows, Mac and Linux (and we have experimental mobile support too!)

This is the first release of Avalonia after it was renamed from Perspex! We did this due to potential trademark issues with the name Perspex.

Get the release through NuGet and download our Visual Studio extension. You can read our (unfortunately very brief atm) getting started instructions here

Here’s the big features in this release - a lot of improvements have been made everywhere but these are the big hitters:

Avalonia now has item virtualization, which means that working with large lists is now feasible. Previously, when binding a ListBox to a list of e.g. 10,000 items, then ListBox would create a ListBoxItem for every single item, which was very slow. Now by default virtualization is enabled on ListBox meaning it will only create ListBoxItems for the items that are currently visible.

You don’t need to do anything to enable this behavior - it’s enabled by default - but you can turn it off by setting VirtualizationMode="None" on the ListBox.

Avalonia applications on Windows will now scale their contents to the DPI of the monitor that they’re being displayed on and the window will automatically change DPI when it’s dragged to another monitor with different DPI settings.

You can now include resources such as brushes and colors in styles so that they don’t need to be hardcoded each time they’re used:

This differs somewhat from the standard XAML Resources collection which is defined at a control level rather than a style level. To read about the reasoning behind this, see this issue comment.

Work is underway to add a Skia backend using Skia# which will hopefully replace our Cairo backend for non-Windows platforms. Skia is a modern 2D graphics API that better fits Avalonia’s drawing model than Cairo and also works on mobile platforms.

The Application was previously semi-platform-specific in that if you wanted to have an application that ran on Desktop, Android and iOS you would need a different Application class for each. This wasn’t ideal because you’ll often want to share 90% of the Application.

Alpha 4 adds the concept of an AppBuilder which is called in your Main entrypoint and will configure the platform-specific parts of the Application. This means that you typical Avalonia program’s entrypoint will now look something like this for desktop applications:

While iOS applications will be configured using something like:

Jeremy Koritzinsky also implemented support for window icons. The following example loads the icon for a window from a Manifest Resource called test_icon.ico.

Nikita Tsukanov and Dan Walmsley implemented system Dialogs for File Open, Choosing a Directory and File Save. An example:

Abdelkarim Sellamna started a nice clean up of our designer UI, bringing a familiar look and feel: 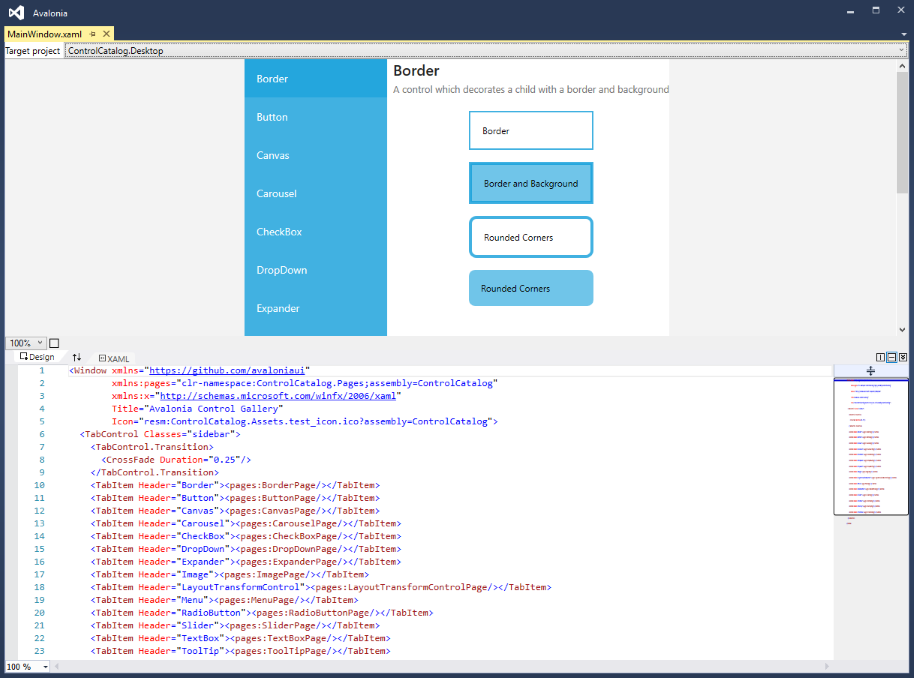 Wiesław Šoltés has ported UWP’s behaviors to Avalonia. XAML Behaviors are an easy-to-use means of adding common and reusable interactivity to your Avalonia applications with minimal code.