In my day job, we recently started a project that we thought would be a good fit for a Windows Store app - especially with the upcoming Windows 10 which will allow Store Apps to run in a window and look more like traditional desktop apps.

This blog post is a diary of getting started with Window Store Apps from the perspective of a relatively seasoned WPF developer. Spoiler: It didn’t go well. However, I realise that with any framework there are roadbumps, so think of this this as a “new user experience evaluation”.

We needed the application the be modular so I figured this would be the perfect excuse to try out Prism which has been updated to work with Windows Store apps. having watched a couple of videos and read a few articles I felt like I was ready to get started. I’m using Visual Studio 2013 - at the time of writing Visual Studio 2015 is still in CTP.

First thing to do was create a new project.

Now; Universal App vs Windows App? It’s unlikely that this app will ever be run on phones, but tablets? Maybe. Also people are saying Universal Apps are the future? Lets go with that. There’s not really any guidance I could find on whether or not Windows Apps should still be used.

So Blank App (Universal App) it is:

That’s a lot of boilerplate! Takes me back to the MFC days (yes, I’m just about old enough). Luckily having watched the Channel 9 video Prism for Windows Store apps I know that it will all be deleted.

Aside: It appears from watching the above video that the default template is geared toward developers who prefer the code-behind approach to coding. Except: every developer I’ve ever heard of that uses the XAML stack uses MVVM. Why are MS still promoting code-behind to developers starting out? IMO it should be MVVM from the beginning. The only excuse is that code-behind development requires less code for a basic starting app. Except you can plainly see that that is not the case here.

Now we can delete all that nonsense in App.xaml.cs. Yay!

MUCH better! Now I have to go and do the same in the XAML designer (wouldn’t it be nice if it could do this automatically?).

I see XAML intellisense is helpful as ever! I was wondering if the WPF experience was second rate compared to Windows Store but it looks like they both have the same problems. Never mind, I know what the class is called and after all, I understand: enumerating the content of a namespace is difficult.

Navigating to the Start page

Now we can add the OnLaunchApplicationAsync method override in to navigate to the start page which we’re just about to create:

Ok, and now onto… hold on… Ummm… What? You can’t find InitializeComponent now?

F6… Ok, you can find it now. It seems that whenever I make an edit in App.xaml.cs it confuses intellisense and marks this.InitializeComponent(); as an error until I do a build. That’s something I never saw in WPF. Starting to look like we didn’t have it so bad.

I want a start page like in the Windows 8.1 Reader application that will allow the user to open a file: 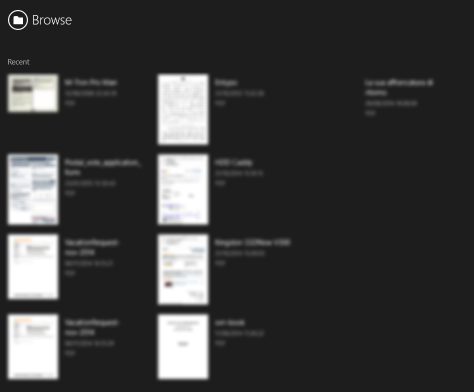 First step is to create a Views folder, and in there create a Blank Page called “StartPage”.

Creating a Circular Button… or not…

Ok, now to create the circular button. Man, am I looking forward to a better syntax than the MahApps.Metro syntax for creating circular buttons with icons in them.

So how do I create one then? It must be one of the first things that the tutorial apps teach you. Hmmm… It doesn’t seem to be. Ok, here’s the AppBar control which has circular buttons. I wonder if I can use an AppBarButton?

Ok, that’s not bad for a first attempt, but the alignment is all off: there’s too much margin around the button. Can I change that somehow? Lets look in the template.

Oh, no. The margins and sizes are fixed and there’s a TextLabel TextBlock in there that is in the wrong place taking up space at the bottom. That’s obviously not the way forward then. Hold on, I saw in some of the “New Page” templates that they had a back button with a circle! Lets take a look at one of them. Ok, Add -> New Item -> Basic Page.

Uhhh… Not sure what this means, but as I just want to look at the XAML for the page I’ll click “No”.

Okaaayyy… So I told you not to add missing files, but you seem to have gone ahead and added four extra files that do I don’t know what, and then told me that you can’t find a file, which appears to be because you’re looking in the wrong place… And then when I click on “OK” you bring up the “Add New Item” window again for… reason?

The good news is that WPF is starting to look really polished in comparison!

Anyway, lets delete those files and look at the XAML for that back button.

Shouldn’t this have been easy?

To StackOverflow it is. I guess I’ll continue this later.

Next Part: Getting started with Windows Store apps - Part 2