We’re pleased to announce that alpha 2 of Perspex is now available.

Perspex is a cross platform .NET UI framework inspired by WPF, with XAML, data binding, lookless controls and much more. Take a look at the video to see our current progress: Here are some of the highlights of this release - we’ve come a long way in the 3 weeks since alpha 1!

Nikita Tsukanov and Darnell Williams have done the impossible and got a basic designer for Visual Studio working. It’s still early days and not everything is supported yet, but it’s a massive step towards a user-friendly designer experience with Perspex. Take a look at the video above to see it in action or download the VS Plugin

To see more examples of what you can do with Perspex styles, check out the documentation

Of course, our XAML support is only available thanks to OmniXAML!

Perspex now runs on *nix platforms using mono - this includes Linux and Mac OSX. For information on building Perspex on *nix take a look at the build instructions.

As well as doing the impossible once with the designer, Nikita Tsukanov has also ported the HTML Renderer component to Perspex, giving us a 100% managed HTML 4.01 and CSS 2 renderer directly in Perspex. 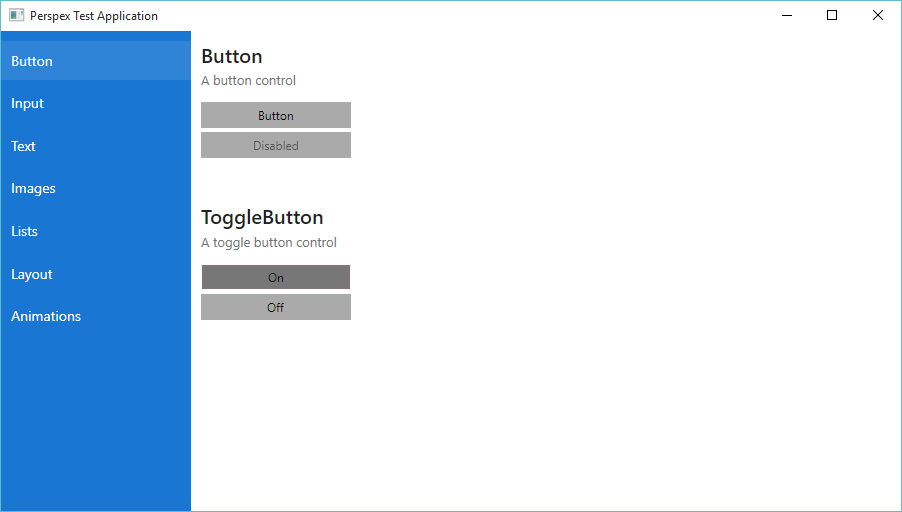 Nelson Carrillo (as well as hammering our Cairo backend into shape) has contributed a new controls showcase to Perspex. This is a lot better looking than our previous cobbled-togther test application and should give a good idea of what Perspex is capable of at the moment.

The following new features have been implemented:

We are now hosting nightly NuGet packages on MyGet.

If you’re wanting to join in, take a look at the up-for-grabs issues on GitHub - these issues are an ideal place to start for a newcomer - then come join us in our Gitter Room and let us know what you’re thinking of doing.